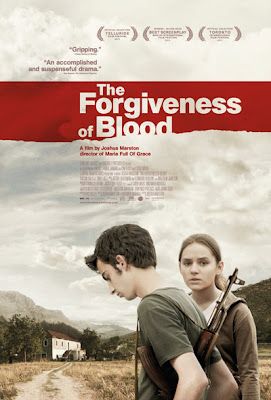 Joshua Marston, the indie filmmaker of Maria Full Of Grace (2004) returns after 7 years with another feature, just as raw and bleak.

A low-budget drama set in the heart of Albania, The Forgiveness Of Blood tells the somber life of 17 year-old Nik, who struggles to have a normal teenage freedom, or abide by the ritual of blood feuds after his father kills another man. The juxtaposition of an increasingly modern life against the well respected ancient cultural code, puts the young protagonist in an unpredictable situation, and makes us shift in our seats.

The film premiered in Berlin in 2011 and has an all Albanian cast.
This week, it is released by IFC.

For more on this, please read a full interview with Joshua Marston done by TribecaFilm.