(Part 1. ...I have conducted a small activity when I was in Albania regarding the topic. Later on the paper I will further explain it. As I said I will focus my research in a place or village called Dhermi.....
&
Part 2. It is true that for the moment the situation on that area is not good, and many parts are covered with rubbish or are not cleaned by the natives themselves, but I have been thinking of a number of reasons why this situation will change.... )

Firstly I believe that the new environmental reforms that our state is undertaking regarding the integration process will help in improving the situation of different landscapes and natural reserves in Albania.
This is the case for my favorite landscape, the one we are talking about.
In a few years I believe the state will return to its position as a regulatory tool for tourism and business. This will definitely touch the landscape in Dhermi (the name of the village) and natives will finally understand that their life and business is dependent on the landscape. They will care for it more than anything.
The reasons why the landscape changed were mainly political and human caused.
While the change that I predict for the future will be in synchronization between them.
First the government has to take the situation under control and people will be conscious and will have the awareness of their surroundings.
For the cultural part I think there will not be many changes in the future. The southern part of Albania has a big influence from Greece and this is reflected especially in religion.
All natives of that area are Christian orthodox and around the forest there are many small chapels and also big churches near the village. 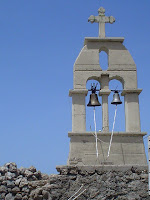 One thing that did not change was the maintenance of these churches.
They resisted to communism which was against any kind of religion and they have been maintained by natives of the area for the last 20 years.
Today many tourists visit the hundred year’s old churches and small chapels or temples where people can pray or just enjoy the culture differences.
In my opinion this religious culture will not change and therefore the cultural landscape will be the same, preserving the old tradition.
I believe this way because I know that in Albania there is harmony between religions. So in my perspective the future of this landscape will be a better one. In physical terms, I would say that what is already ruined will take years to be restored, like for example trees and other vegetation but the rest will hopefully be maintained and used efficiently for the good of natives, tourists and of course nature.
I decided that all the observations I have made in these years should be communicated and delivered to people in order to see the impact it has on them. For this I decided to use the simple method of walk and talk. I cannot consider them as interviews because it was mostly talks.
When I was in Albania 1 month ago I decided to talk to people in my city about all these changes in the last 20 years that happened in Dhermi; decided to address only to persons between the age of 40-60 years old because they might have visited the place during communism time and after it, so I wanted to hear their opinion and their reaction. I talked to 20 persons, many of them did not visit the village and the beach during communism because not everyone was allowed to go there, but they had been in the last 20 years.
6 persons had visited the place in both periods.
After talking to them and explaining my observations, the changes and their reasons, all of them agreed on the current situation. The persons, who had not visited the place during communism, were worried mostly about the pollution of the environment and they were aware that something must be done for that place. While the 6 persons who had visited the place on both periods were more revolted to what has happened there in the last 20 years. They were remembering how the place was 20 years ago and how it is now. For them the changes were drastic and they were blaming mostly the government. From their reaction I understood that the place was much more different when they were young, meaning 30 years ago.
This is the small activity I used to convey my interpretation of this landscape for the last 20 years. If I would analyze the approach I took for this activity I would say that there are positive and negative features in it.
The positive one I think is the selection of the audience. I chose the age group of 40-60 years old because they have witnessed more in the political, social and cultural history of the country and they have been living in both political systems, so they are able to make a better distinction. If I would have asked young people around the age of 25 I am sure that they would not be very much worried about the landscape as long as there are nice hotels, bar and pubs for them near the beach.

While regarding the negative parts of my approach or better saying what I could have done better, it has to do with the place where I did these talks. I met people in my city, in the capital and it would have been much better if I could have asked natives of Dhermi village.
The natives have been living there so for them the changes are even more obvious. Maybe by asking some people who were actually part of the social changes to the landscape I could have gotten some more appropriate answer and reasons why all this happened. Maybe a more detailed research and a higher number of people asked could have given more information on the awareness of people about landscape in Albania.
I choose the village of Dhermi not only as my favorite landscape in Albania but also as one of the most frequented touristic place in Albania in the last 10 years.
After all this thinking, analyzing and evaluating, a few questions come into my mind.
It is more appropriate though to introduce some real questions about landscape.
Is landscape a scene we are looking at, or a world we are living in?
Is landscape all around us or just in front of us?
Do we observe or inhabit landscape?
(Wylie, 2007, p.4)
It is through these questions that people should start thinking more for the landscape around them. They should start to understand that landscape is part of us and that we are part of it.
We were born in nature and that’s where we are supposed to live.
Therefore we should take care of the nature just as we take care of ourselves.
Imagine a world without nice and beautiful landscapes?
It would not be called our world anymore.