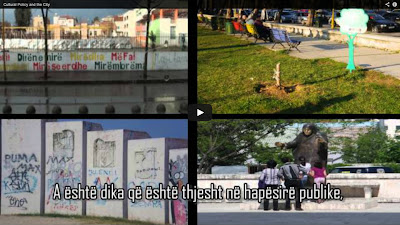 Last week we posted a clip from the Cultural Forum Conference held in Prishtina last month. The goal of this gathering was to initiate dialogue between the independent cultural sector and municipalities of Albania, Kosovo, (FYR) Macedonia and Serbia.

As participants examined cultural policy and city in the context of city policies, it becomes obvious that we need to move beyond 'what ought to be done' and asking questions, towards collaboration to strategically execute the 'how to do it' and solve the problems in the region.
I think it's the right direction and hopefully a long-lasting relationship and partnership within the region for productive and successful cities. And that's why I'd like to share the presentation from Ekphrasis Studio, an initiative for cultural and creative development in Albania and abroad.

Presented at the Conference “Culture Policies and The City”, supported by Forumi Kulturor and CULTURIST, Prishtina, Feb. 27, 2013

Cultural policy has a misleading translation in Albanian administrative (Politika Kulturore- Eng. Cultural Politics) that easily confuses anyone with politics. But definition or wording aside, cultural policy is still a concept that, if existent, is hardly implemented, and that very few understand or show an interest in.

According to Compendium, the first Guide to the national Cultural Policy was drafted by the Ministry of Culture, Tourism, Youth & Sports (MCTYS) in July, 2010 with emphasis on national heritage, modernization of the society & participation in cultural life, decentralization of culture,protection, support and promotion of the Albanian identity & diversity1. Also, in July, 2000 the Law on the Organization and Functions of Local Government was implemented stating the autonomy of the local government as a way of decentralization. However, the decentralization of culture has not yet proved to be productive. The disagreements about funds and authority, between local and central governments, has to led to lack of funds for culture and cooperation between MCTYS and municipalities.2

Tirana as a capital city, in comparison to other cities, has no local cultural policy from the municipal level, aside from a few statements to make it the ‘city of arts’, decorations for the “Ambassador of Tirana”, and sporadic cultural events. In comparison to other cities, in Tirana the main cultural policy is implemented by the central government, thus the Ministry of Culture, with the support of local municipality. Other municipalities do not have a clear cultural policy, rather a few general perspectives and activities, or a wish list. After a recent conference in Paris, the Mayor of Berat published on the city website “a message for stronger collaboration”, however nowhere did he explain what he means or how to do this.
There is not yet a clear division of authority between institutions, and state cultural institutions rely on state funds and not box office and sales, thus staff sees no incentive for additional efforts, and the already low status quo remains.

What is currently lacking and is of great importance, is to find out what people think, want and what are the existing strengths. By consulting the public and mapping what we know, we can find what we are missing. It is also very important to establish a set of coherent principles, objectives and ways to to protect, promote and produce culture, for which people’s voices are crucial.

As every citizen, our concern starts with the concept ofcultural commons – why do we see what we see as cultural goods in the city, as well as clarifying what are the missing economic opportunities from creative cultural industries in the city and nation wide."

For a full presentation transcript go to their website, here.

There are dark shadows on the earth, but its lights are stronger in the contrast. See the link below for more info.

I really love your blog there's a lot to share. Keep it up.Visit my site too.

you could have a fantastic blog here! would you prefer to make some invite posts on my weblog? gsn casino slots