*(sort of a year in review, bits and pieces written on social media in 2015)

More on what was previously defined as the relationship of Men, Monuments, Monsters, and Memory:

We expect too much of buildings and too little of ourselves. ~ Jane Jacobs 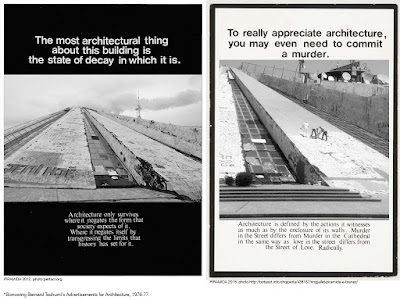 If it doesn't die, how does it age?


After reading quite extensively on heritage in ‪Albania, its ethics, aesthetics, authenticity vs. origins/originality, renovations, etc. I think, no matter the intentions, when it comes to buildings, the conversation on preservation vs. restoration has no real winners. Good enough results maybe, but no winners. Against time, we cannot win. if we restore, we erase a bit of that history, a well intended cleansing yes, but nonetheless a cleansing. there is no such thing as a perfect act of restoration that returns a historical object to its original self, even if it's done just right. that's why it is a historical object. It is supposed to be old and weathered, even wise in its survival. Why force it into youth? The kind of youth that as long as it looks youthful, we don't care if it feels that same way. Its context has evolved, be that surrounding landscape or urban fabric. Its own self has changed as well, renovated or repurposed, used and abused through the years. By restoring it, we impose a utopia, a nostalgic, even idyllic, memory that can now exist or be fetishized only in its renewed state, thus rendering itself irrelevant to the meaning of heritage and what(ever) it stands for. If it can be washed out (cleaned up) even reproduced, then what's its historic value?
On the other hand, preserving it or just letting it run its course will, too, (without forcing back time) fade away its being and erase parts of its history. Weather, material degradation, and structure, will definitely take a toll on its ‘heritage’ standing, but as natural factors of its ecology, they preserve the legacy of its origins. We all know that a building doesn't last forever, and yes, it might turn into blight or might take other dystopian form, but it doesn't mean that its heritage has died. It doesn't mean that it is not authentic. It has simply evolved or mutated into something else. A new kind of heritage dare i say. One that doesn't ‘renew’ time thru aesthetically ‘accurate’ acts or interventions in the name of ‘heritage’ or for heritage's sake, but by simply letting its heritage become (along with rigorous documentation, research, expertise and so forth), whatever it might turn into. That is the beauty and consequent meaning of heritage, to not predetermine it, to not put an expiration on it, to not force its legacy. By restoring it, we renew it, we add something foreign to it, something of another time, another value, another meaning, even if it is aesthetically compatible. and yes, we can call it a mutation as well, but one of a different value and consequence to us, our culture, history and legacy.

So, if the race to find a solution or maintain a ‘sustainable’ (lack of a better word) heritage doesn't get past one-liners, be they about preservation or restoration, then our understanding and acceptance that they both erase a bit of history, will be delayed. we won't know when to use one instead of the other. There isn't much defense against time. All we can really do, is to not be offensive to our heritage. We can start by answering this question: if it doesn't die, then how does it age?

It’s time we stopped talking about our affluent society. We are an impoverished society. It is a poor society indeed that can’t pay for these amenities; that has no money for anything except expressways to rush people out of our dull and deteriorating cities.

~ Ada Louise Huxtable, Architecture: How to Kill a City, 1963

Let's think of such objects as victimized ‪bodies‬ subjected to systematic abuse in two parts: violent expulsion, evident by their physical decay, followed by a glorified patronizing of their (now) ghastly abstraction. Making space where none exist, here, could mean reinterpreting then re-staging what we want these bodies to be or do for us, refusing to understand and accept (their independence) what they are, why they are.

The confidence to do arbitrary interventions (victimize) from within (the psyche and body) not to bother anymore with superficial cosmetics (that fall flat by shining too bright) only for public perception, tells the tale of frustration the private persona has with its public leash, and the public figure's overcompensation to show its other self who's in control (with all its meanings: contra, con and troll).

This reinterpretation (art) through abuse until the bodies are abstracted (tortured to erase themselves) becomes a fleeting moment of euphoria right before passing out.

How do we then slowly reintroduce these bodies, their vulnerability to the everyday society and life, without ‘accidentally’ killing them?

The ‘blind spot’ of any culture: the inability to conceive of its own devastation [...] If we could give a name to our shared sense of vulnerability, perhaps we could find better ways to live with it.