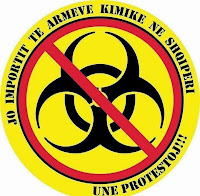 The much debated and protested civic movement in Albania at the moment is the overwhelming presence (online and on the streets) against dumping Syrian chemical weapons in the country. Even though the process of disarming and disposing the stockpile of chemical warfare is supposed to be supervised by international experts and not affect the security of Albanian life or health for that matter, I am defining it as ‘dumping’ because we know better. We have experienced botched up jobs and shady operations for similar warfare agents, such as arms and ammunition, and we haven't been quick to forget or recover from the devastating consequences of the ensued tragedies. (Gerdec anyone?)

Understandably the immediate concern people have is their health, followed by a long list of possible side effects from the possibility of exposure (those invisible toxins can be easily spread through transportation or on site). Environmental prosperity is another main concern, because it affects the quality of life including air, water, land, crops, as well as economy, employment, health care, etc. Remember Chernobyl? We know better than to rule out ‘accidents’ (be that human error, corruption, theft, etc.) especially in a quasi-stable, still developing, slowly-post transitional country such as ours. Fearing a hazardous future, will disrupt the present stability in Albania. Even if things go as planned (when does that ever happen?) when destroying the waste, we should take into account the unpredictable life span of its materials and possible byproducts in the long run. A lingering latent threat. Future generations beware.

As one recent article puts it: “It will be much harder to dispose of the chemical agents themselves.[...] Eliminating such a large stockpile will require creativity.”

It's a fact that Albania doesn't have the necessary means to destroy these weapons, and I can convincingly state that we ain't got the creativity either or better yet the responsibility to take on such a task. Our general knowledge about chemical warfare is vague. We have been mere spectators. It's always been somewhere far away, in countries seemingly distant from our own. That's why we're panicking. In shock just to be considered and selected as a possible dump site for such waste. But why? Does the world have faith in us, or simply doesn't care? We not only lack the expertise on the subject, but the relevant (no bullshit) information to educate and voice our civic capacity on this matter (shape opinions and inform decision-making). Since the story broke a few days ago, we (think) have become overnight experts, but are we able to continue this somewhat constructive dialog about options, possible actions and educational decisions, and not be blindsided by political agreements that exclude us this civic right? We've started the conversation with NO (and rightfully so) but how do we continue it? What are we willing to do, to see it through?

In today's Albanian fragile climate, be that political, economical, infrastructural and even social, it is hard to maintain a sustainability of sorts (markets, networks, technology, growth) and slowly build upon it as a stable status-quo, let alone contemplating about chemical waste. It can easily kill this post-election upward momentum we got going on. A disruptive move that has blindsided us, just as a war would. We're just getting back on our feet. We are not ready. We are not even prepared.

**
Let's zoom out for a moment and take a look at data from United States: (in an effort to put things into perspective and maybe shake up the undecided)

Stepping away from the overwhelming unease and speculative future that has taken Albania by storm, I want to introduce a U.S. project that takes a close look at these weapons, as materials that ‘can cross jurisdictional lines, bend political, economic and environmental realities around themselves, reshape geologies and reconfigure landscapes now and into deep futures. And they do so almost entirely without notice.’ (via)

Look Only At The Movement explores and examines the relationship between the American Highway system and nuclear waste transport, disposal and remediation. It aims to increase civic awareness and encourage new angles of exchange in regards to ‘contemporary material realities that are simultaneously of us, and far beyond us.’

“It invites imaginings, curiosity, and logistical questions about how contemporary life, landscape, and infrastructure design will, for foreseeable futures, bend their realities around the need to contain and indefinitely move-with nuclear materiality.”

Here is an excerpt of the findings:
(my emphasis) (original article)

“What you do not see is the material itself: the vast quantities of spent nuclear fuel, uranium mine tailings, radioactive medical waste, and contaminated soil, debris, clothing, tools and equipment transported routinely along [...] streets, highways and railroads.

Seventy years into the Atomic Age, designers, engineers, governments and the public have not been able to adequately imagine or build infrastructures for the long-term containment of materials that are too dynamic to be named, or understood, merely as “waste.” The United States is currently processing, shuffling and storing nuclear byproducts at some 20,000 sites throughout the country. About 70,000 metric tons of spent reactor fuel are held at power production sites in 33 states, an amount that increases annually by 2,000 metric tons. Another 13,000 tons of high-level nuclear waste is left over from weapons production and other military activities. You could say that high-level waste is “sheltering in place,” waiting for the first infrastructure capable of containing it for the span of time mandated by the Environmental Protection Agency: one million years. No such storage options are expected to be available for at least the next century.”

I believe that sending chemical warfare to a country such as Albania, with no adequate facilities, technology or infrastructure to demilitarize this hazardous artillery, is not only an Albanian concern but a threat to the stability and peace everywhere.

Can these protests take us a step further (or backward if you will) into the existing state of our territory, rundown infrastructure, outdated technology, questionable factories, unhealthy sewers, old building systems and realize that an update is imminent? We can't catch up to today's fast paced, super advanced world, or even consider hosting chemical waste if we can't stay relevant to our own society.

**
The above article is written as a follow up on comments I had made earlier:

Politicians are not experts, and political predictions of what is 'safe' can be proved far more damaging than what they promise today and are willing to admit tomorrow (when faced with the consequences). #DontDumpChemicalWasteInAlbania

What worries me, other than the devastating consequences on people, environment and the obvious fact that Albania doesn't have the necessary means to destroy these weapons, is the physical security of the chemicals. As in most unstable countries (Albania being a semi or pseudo stable one), this product might be (is) in high demand on the black market and as we've previously experienced (with arms & ammunition) somehow through corruption or inadequate secure systems, it might be stolen and sold to the highest bidder. Consequences that go beyond the geopolitical territory of our small country to threaten peace at a much larger scale.