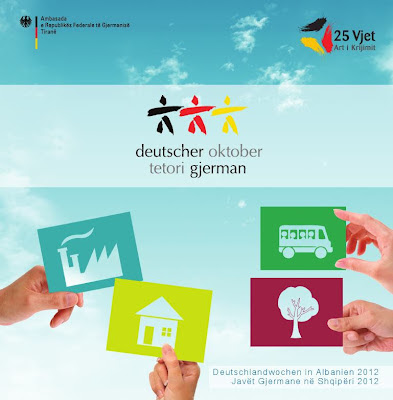 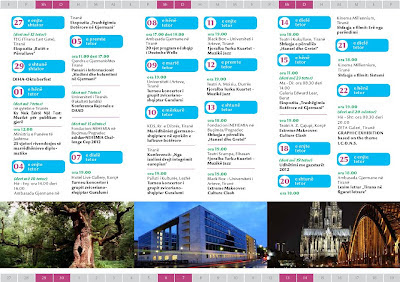 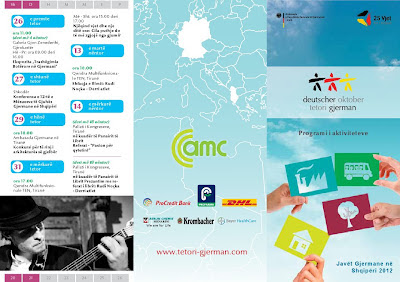 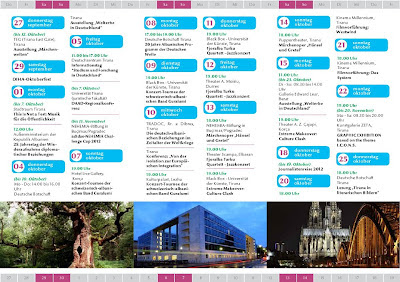 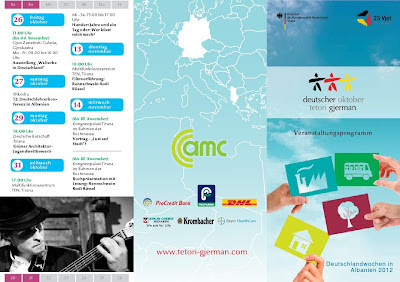 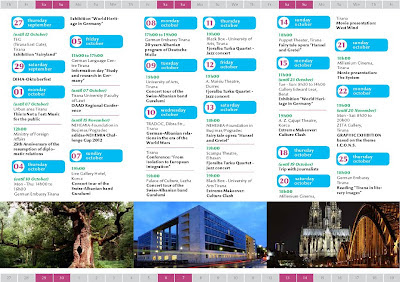 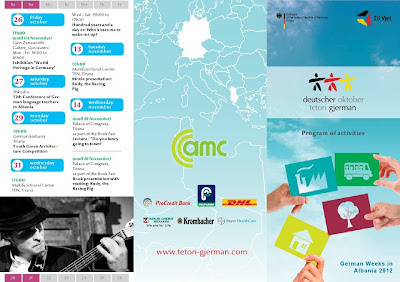 "Sweatshoppe is a new multimedia performance collaboration between Bruno Levy and Blake Shaw that works at the intersection of art, music and technology. Developing software to construct a totally unique interactive performance, the duo works towards creating unique ways of affecting an audience. Whether it be as a dance driven electronic music performance that emphasizes sound reactive visuals, building interactive installations, or the fabrication of guerrilla technologies to augment public space, the duo strives towards an element of pop accessibility that is so often ignored in the technocentric world of experimental media."

Earlier this year, the duo traveled to European cities like Berlin, Bristol, Belgrade, London and Paris to 'paste video collages' on different buildings, including The Berlin Wall. Their art is part interactive installation and part urban performance, a 'video painted graffiti' with no actual paint,  that uses specific software to “track the position of paint rollers and projects video wherever the group chooses to paint.”
For more on Sweatshoppe’s multimedia work go here.

Torre David | Gran Horizonte, an abandoned/unfinished office building in Caracas, Venezuela, has received the Golden Lion as the best project at the 13th International Architecture Biennale in Venice.

To comply with Biennale's 'Common Ground' theme, the exhibition consist of a Venezuelan Arepa Restaurant - a social space where meals are shared and conversations generate ideas about how to study these kind of social settlement in abandoned buildings globally, and how do they change the future of urban territories.
This is a collaboration between Venezuelan-based Urban-Think Tank, London-based curator Justin Mcguirk and Dutch photographer Iwan Baan, whose photography of the informal vertical community is exhibited in the Biennale.

The tower is a 45-story concrete frame structure, designed by Venezuelan architect Enrique Gomez, was almost ready when it got abandoned after its developer David Brillembourg died in 1993, and the country's economy collapsed a year later.


"Today, the tower functions as an improvised home of more than 750 families, inhabited by people whom would otherwise live within the barrios of the city, and has become a functioning and independent living environment for residents through a haphazard and organic method of development. Some have even called the extra-legal and tenuous occupation a vertical slum."

The building does not have any elevators, only stairs. Also, what makes this tower 'truly mixed used' are the other public use programs added by the tenants such as: a church, restaurants, hair salons and tailors.
Urban-Think Tank has studied the current state of the site, building and its social space. They see it as a potential model for 'vernacular vertical communities'. U-TT's concept of the tower as a 'laboratory of informal study' should be applied to unfinished or abandoned developments around the globe as an experiment, in order to figure out what the future of urban development holds, and who are the best actors to contribute in designing a more 'equitable and sustainable future'.

In my opinion, this project has the complexity of a great potential in redefining how urban planning and designing is done.
If the typical user is 'a slum-dweller' whose shelter is 'an informal settlement', then we'll have a different kind of urbanity, not the standard one found in books and city offices.
Let's look at this scenario. It could be our reality today.
A collapsed economy has left most people without jobs, foreclosed houses and office buildings empty.
I might be a bit harsh in even mentioning it, but how do we design for a displaced even homeless user? How do we design or plan an urban life for such a community?

The economy affects the most that who has a lot to lose.
A homeless? Not so much.
Hence, owners of now-empty buildings might lose their land and air to the now-displaced tenants that need a shelter. There is a shift in play, in power.
How do we approach that as architects, designers, urban planners, etc.?
Who are we designing for?

These are some of the complex issues brought up by the above project and a lot more questions that follow...

Balkans Beyond Borders Short Film Festival 2012 with title TALK TO ME- multilingualism and communication opens its doors to all young and creative people as well as everyone passionate about the short film industry.
The 3rd edition of BBB Short Film Festival is a co-organization of Balkans Beyond Borders and Tirana Art Lab. We support all young film makers that put all their filmmaking energy into building bridges among people in the Balkans.
People from all around Europe are invited to a 3 day celebration of Balkan diversity. This year’s festival tackles the topical subject of multilingualism and communication and motivates young people to “TALK TO ME”.


“The Balkans are known for their culture, traditions and multilingualism and it is exactly this diversity that we see as an added value, an opportunity to share and exchange our experience.”

Young Film Makers from the Balkan region and beyond put all their imagination and creativity and express their viewpoint through the art of filmmaking.

With the support of the European Fund for the Balkans.

At the 'Light In Winter'  festival held in Melbourne, Australia this past June, the spanish group Luzinterruptus presented an instalation, the structure of which occupied a fairly large area, the largest to date from this group.

This year's theme was 'reading', so the artists were asked to take their project  'Literature vs. Traffic' , a piece they had previously installed in New York and expand it during a month.

With more than 10,000 books discarded by public libraries and lighted by Guerrilla Lighting along with other friends and volunteers, these pictures tell a better story of the month long work, execution and feedback for the project. 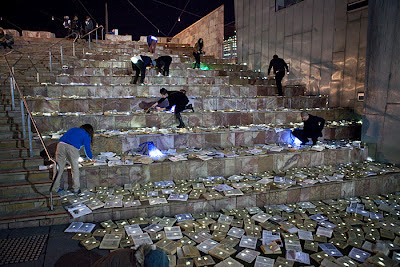 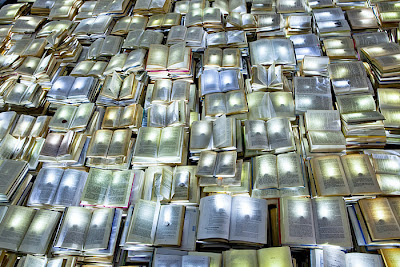 "We want literature to seize the streets and become the conqueror of public spaces, freely offering to those who walk by a space free of traffic which for a few hours of the night will succumb to the modest power of the written word.

Thus, an urban space conventionally reserved for speed, pollution and noise, for a few hours will become a place of peacefulness, relaxation and coexistence. Illuminated by a soft, diffuse light which makes us feel comfortable, in a pleasant environment, in spite of the chaos which surrounds us.

The books, of diverse topics will remain, during the entire intervention, at the disposal of anyone who wants to take them, signifying that the installation will recycle itself and be of the duration which the users want it to linger before disappearing." 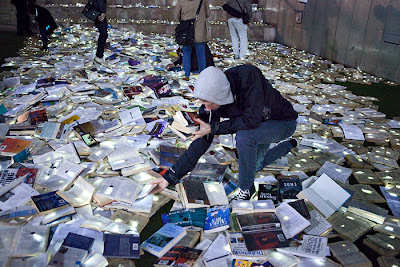 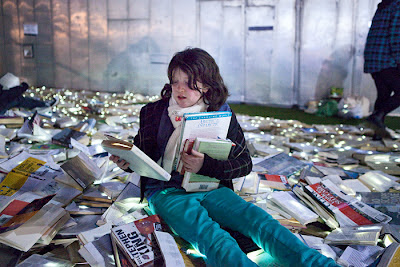 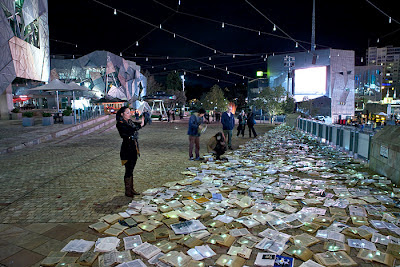 "The end of this piece? The same as the first time, a river of books overflowed physical space for pedestrians to use, installed in the space allocated to cars, stealing a precious space from the high traffic of the area, as a symbolic gesture in which literature takes over the streets and becomes a conqueror of public space, offering citizens a space (not as big as we would have liked) in which traffic retires to give way to the modest power of the written word." 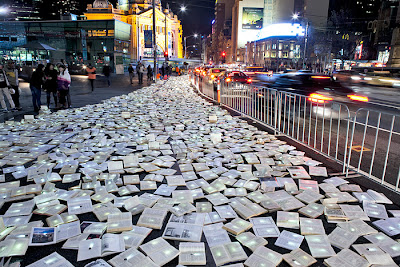 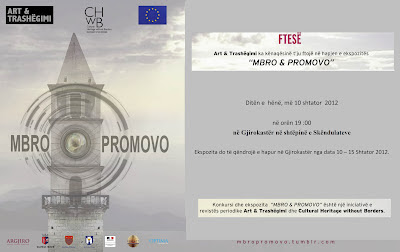 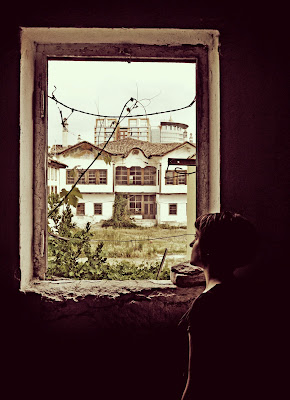 Water Light Graffiti by Antonin Fourneau, created in the Digitalarti Artlab
from Digitalarti on Vimeo.

" The "Water Light Graffiti" is a surface made of thousands of LED illuminated by the contact of water. You can use a paintbrush, a water atomizer, your fingers or anything damp to sketch a brightness message or just to draw.

Water Light Graffiti is a wall for ephemeral messages in the urban space without deterioration. A wall to communicate and share magically in the city. As a public installation it invites everyone to be creative in lighting up the night. Anyone can become an instant graffiti artist. " 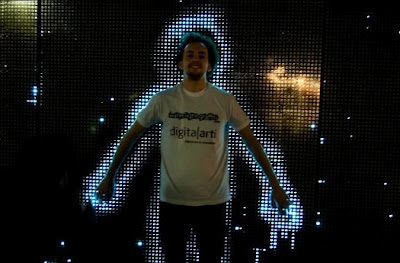 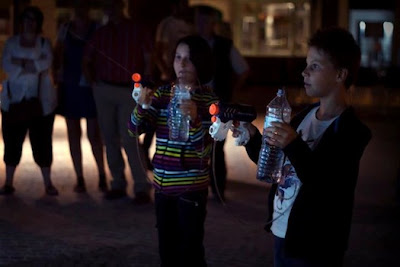 More pictures and details on Digitalarti.

Water Light Graffiti is a project of Antonin Fourneau

Albanian artist Anila Rubiku (here & here) lives and works in Milan and Tirana. Her work, mostly drawings and installations, puts locals into community projects by creating a dialog between tradition and art, local history and contemporary discourse. Her latest work dives into issues such as memory, time, architecture, gender and social problems.


"In her new work made especially for the Biennale, Albanian artist Anila Rubiku Aestheticizes the all-pervasive legacy of ex-President Enver Hoxha’s system of national defence by making it into an installation. Symbols of resistance against a non-existent enemy, Bunker Mentality/ Landscape Legacy elaborates the paranoid form of the concrete bunker (about 750,000 ruins still litter the country) in a “Celebration” of the economic stagnation caused by the same mentality in which Albania is still mired. Difficult to demolish and expensive to remove, they have even become a kind of kitsch national emblem in the form of souvenirs and ash trays. In some cases they have actually been transformed into kiosks, store rooms, cafes, discos – even chapel. Yet in spite of their ostensible normalisation these structures still mask a largely unknown story of violence and sorrow."
David Elliott, p. 56, The Best of Times, The Worst of Times. Rebirth and Apocalypse in Contemporary Art. 2012– The first Kyiv International Biennial of Contemporary Art. Arsenale 2012 – Mystetskyi Arsenal.

Many young Albanian artists have been interested in exploring more in depth Hoxha's National Defense System, mainly focusing on the BUNKER as an artifact, a physically heavy symbol of a paranoid image of an enemy that never was. The way it was constructed made it physically heavy, the way its message was carried made it psychologically grueling. Building an artifact of and by a social anxiety/fear disorder has left traces of unspoken, still not understood shrapnel that Albanians have put a lid on, but haven't dealt with yet. The young artists have shown bravery in dealing with these issues in a socially, culturally and artistic level and I hope they will continue to do so. You can read more about projects like this one here, here, here. 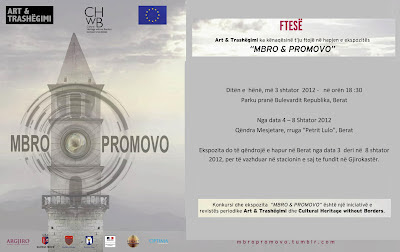 "La Place de L’Etoile is the most dangerous roundabout in Paris. The authorities kindly advise visitors to take the tunnel to the monument instead of crossing the road. Theater group X/TNT came up with a great idea to raise awareness for the issue and to provide a (temporary) solution. Watch the video to find out how they built an instant crosswalk to the Arc de Triomphe." via The Pop-Up City