There are so many things being done with billboards nowadays.
It's an urban element that is actually being used, not just seen.
A visual public artifact that is being physically accessed by an increasing number of people.
By definition and their role thus far, some might compare billboards to privately owned public spaces, which in a way tells us who really owns, manages and defines city[land]scape. [power, politics, money]

Framing the public city as a space of people vs. objects, actions vs. events involves a combination of involvement and separation.

Cityscape becomes a stage of action by people - or an advertising screen, a symbolic representation of 'reality'.
The public's role changes from present to absent, actor/performer/participator to spectator/audience/consumer. People as spatial instigators/users become a system of spatial representation.

Billboards by definition and physicality are screens not stages, a representation of life not actual city life. They are competing with city/landscape to capture and hold the attention of audience: people, the public. Just as the stage that is cityscape, the screen has a direct visual contact with the public, but a separation in time, space and level of reality.
This brings into play a third space, a very public one at that: the realm of sound (and other environmental factors).

A new typology of public space?

How do we frame the public city?

Maybe billboards are created for the sole purpose of being an advertising screen or maybe we have reduced them to be that way, but there seems to be a global movement that is finding new ways of accessing these 'objects' and making them 'move' without (much) change in their typology.

Below, you'll find ways of capturing the present public constraint of billboards and enabling it as a navigational city stage.

txt references:
1. Action and Image: dramatic structure in cinema by Roy Armes
2. Give me a gun and i will make all buildings move. An ant's view of architecture. by Bruno Latour & Albena Yaneva A public art initiative Art Everywhere is putting up England's favorite artworks on over 15,000 outdoor billboards and posters. The goal is turning these spaces into massive outdoor art galleries so people passing by can show more interest in the arts. via 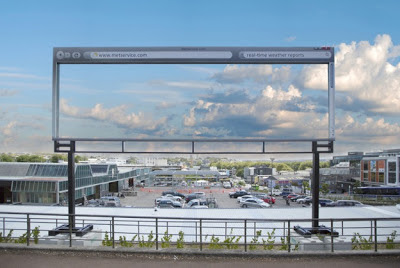 A transparent billboard created by Y&R NZ for MetService in Auckland, looks like a web browser page. It frames real-time weather conditions and it simply advertises weather reports. via

3. Billboard as an Artist Residency 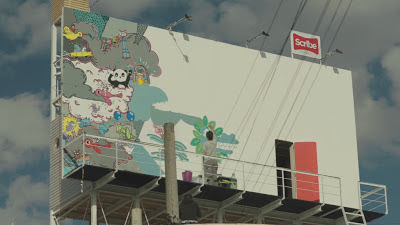 Mexican paper company Scribe has recently launched Scribe Billboard, a temporary residency for artists inside a billboard. via

4. Billboard as a Forest 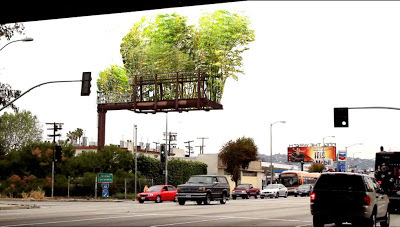 Los Angeles based artist Stephen Glassman with his Urban Air project wants to transform the billboard space above the highway into a bamboo forest in the sky. via 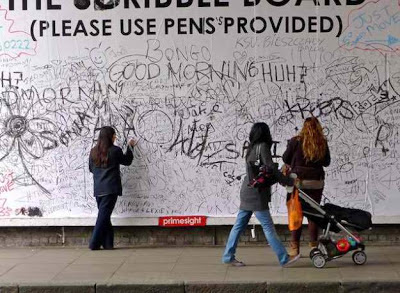 London street artist Mobstr gave the public a chance to become artists themselves with his latest project called The Scribble Board. He placed a white billboard in a busy urban area that quickly became a large doodle board for anyone and everyone. via 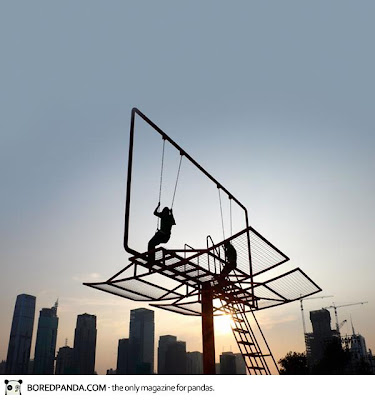 Paris-based architect Didier Faustino made a public swing set from a converted billboard for the Shenzhen-Hong Kong Bi-City Biennial of Urbanism and Architecture. via