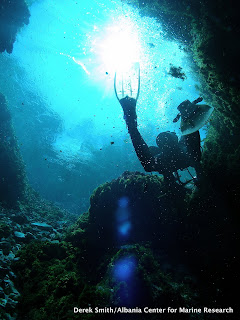 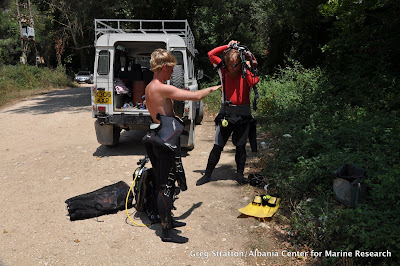 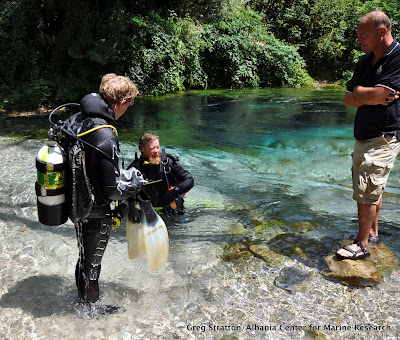 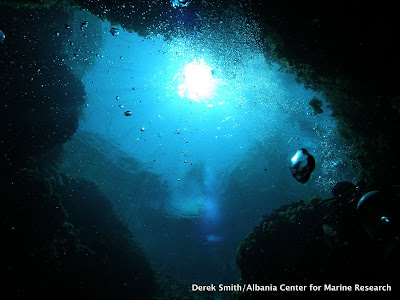 The Albanian Center for Marine Research conducted a scientific survey of the Blue Eye spring on 29 July 2011. The research design was a collaborative effort with the Cave Archaeology Investigation & Research Network (CAIRN), a nonprofit that specializes in ritual cave use around the world, and with support from RPM Nautical Foundation.  There are many myths and stories surrounding the Blue Eye, suggesting the spring was an important cultural center in the past. CAIRN head underwater archaeologist Peter Campbell and University of Washington Biology PhD candidate Derek Smith dove to examine a ledge at twenty meters to examine the potential of the Blue Eye for archaeological evidence of ritual use through the centuries and to begin documenting the flora and fauna associated with the spring system.
The thousands of years of cultures in Albania’s rich history have left an imprint underwater that is still being discovered. This includes underwater caves such as the Blue Eye spring. The spring would have been an important feature in the ancient landscape. People from the Stone Age through modern times would have come to use the spring as a water source and perhaps for rituals and religious purposes. The proximity of the spring to ancient cities, such as Butrint, suggests it might have been a ritual center since similar spring sites are found in France and Italy. The rituals usually honored a god or goddess and included ritual “sacrifice” of wine, tools, or animals. In modern times, people still use springs in similar ritual manners, throwing items like coins into them for luck.

According to groundwater specialists from Tirana, the Blue Eye has an average flow of eighteen cubic meters per second. This massive discharge makes diving difficult and dangerous. In fact, the current is so strong that small rocks are easily pushed up and out of the spring. Scuba diving is potentially dangerous in calm water conditions, but the risks increase greatly entering underwater caves, especially ones with heavy current. Descending against the current is difficult; the force of the water can actually press on the scuba mouthpiece and cause air to flow freely out, losing precious air. Exiting the cave is the most dangerous part of the dive. Increasing water pressure has a number of detrimental effects on human physiology as well as the air. If a diver was taken by the current and rapidly carried to the surface, decompression illness or even death could occur. The scientists on this project were fortunate to have an accurate map of the Blue Eye made by previous divers, thus helping them prepare for the cave’s terrain. The map shows a near straight drop to twenty meters where the spring has a ledge before continuing downward on its southern side. This ledge is located perfectly to be a catchment area for any artifacts coming down from above, which made it the target for the survey.
Evidence of humans depositing items into the spring can be found from one to twenty meters. However, the greatest amount of artifacts was found at the ledge. The vast majority of items were modern, such as broken glass, concrete, and iron pieces. There was potential evidence of older use, such as wood and animal bones. One bone showed evidence of cooking, which could point to ancient sacrifice where a feast would be prepared and animals killed in the honor of a deity. The ledge certain was successful as a catchment area, but the strong current likely prevents many items from drifting down without being forced back out. Future research may find other springs that have less flow and better preserved evidence of ancient peoples. The interdisciplinary team used only non-invasive methods to document the cave, leaving everything in situ for future visitors and researchers to see for themselves.
The information that was gathered will be used to measure the feasibility of future scientific cave diving in Albania and exploring how people use caves ritually, both in the past and the present. The Blue Eye will be the focus of a paper presented to the Society for American Archaeology in 2012. Further information will be shared on the Albanian Center for Marine Research website. The project was a successful initial survey, demonstrating the feasibility of diving Albanian springs and showing this spring could contain significant archaeological material. The survey revealed why strong oral traditions have persisted about the spring over the centuries. It is hoped the future will bring a long-term survey mapping Albania’s springs, exploring how ancient and modern Albanians use underwater caves.