via Balkans Beyond Borders 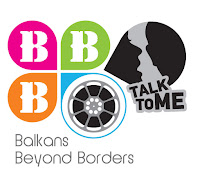 Call for submissions for the Balkans Beyond Borders

Balkans Beyond Borders opens the call for submissions for the:
3rd edition of Balkans Beyond Borders Short Film Festival.
Celebrating Balkan diversity, multilingualism and communication,
the 3rdedition has as title “TALK TO ME”.
For one more time young artists up to the age of 30 from the Balkan region
and beyond (Southeast Europe) are invited to create their own short film related to this year’s topic.
The submission period runs from the:
10th of November until the 20th of May
the festival will take place in Tirana in May 2012.
“TALK TO ME” is a call-to-action for young people to engage actively.
So don’t lose time and TALK TO ME
The main objective of the project is to invite and motivate young people to create short films
through which they reflect on their region’s past, current and future situation.
The aim is to get a better grasp of how they relate to communication in general, as well as to
the cultural and linguistic diversity in the region.
More information on how to apply is available on the Balkans Beyond Borders website:www.balkansbeyondborders.eu
Facebook page (Balkans Beyond Borders) and Twitter (BalkansBB).
Posted by irsiB at 3:46 PM